Hello All, I hope your Springs have collectively Sprung and you are getting ready for a wonderful Memorial Day weekend! This is just a quick update based on my last post which talks about my new board game prototype and offers up prototype boards for playtesting. Well, I’m writing with good news- the first round of testing is officially done! I was able to send off my 2 game copies to volunteers who tried out the game and have sent it back, with feedback pending. Shoutout to Libby and Kellen for kicking things off, I appreciate you giving the game a try!

So now that the first attempt is done, I am again looking for volunteers who are interested in trying out my game! If you would like to receive a copy, please E-Mail jsdixonvab@gmail.com with the request or comment on this post and I will reach out to you directly. You can also go to my Star Crashing web page for more information about the game before you try it out!

After almost a year since my first official Star Crashing playthrough, and a lot of big changes in my personal life (moving to a new place, starting a new job, getting married, that sort of stuff) I’m back on the board game developing horse! Next on my list: make more than one prototype so I can share my game with other interested parties. I put some more work into this version, using stickers and glue instead of trying to photoshop everything into a single low-res photo, and ended up with a pretty great result:

I even made a logo to use for the boxes and all of my online accounts! I’m by no means a graphic designer but I feel confident that these games will serve their purpose until I feel confident enough to find a professional and start looking into mass production options. Based on that, the next step on this lengthy journey is a big one: board game testing by people other than my friends and family! That’s right, I’m opening my game up to the masses in the hopes that I can get some impartial critiques. So, if you find yourself interested in trying out a new game, I’ve got the perfect opportunity for you!

Which brings me to my second big update: the Star Crashing web page. I’ve created a page with information about the game and instructions on how to request a copy. You can go to the Star Crashing tab on this blog’s main page, or just simply click on the click right here:

Alright folks, that’s all for now- hopefully I’ll be writing again soon with an update about all the people who tried out and loved Star Crashing! And hey if not, I’m sure you’ll hear from me again in another year or so…

Hey everyone! As I mentioned in my last blog post, rather than playing other people’s board games I have been working on a board game of my own. I came up with the idea for this game almost two years ago, and I have been fine tuning it ever since. Last weekend, I invited a group of my friends over for a play through of the game and gave them a chance to mercilessly rip it to shreds. Luckily, their criticisms weren’t all that bad, and I’m hoping to make the game even better thanks to their help!

A few highlights from the game testing: 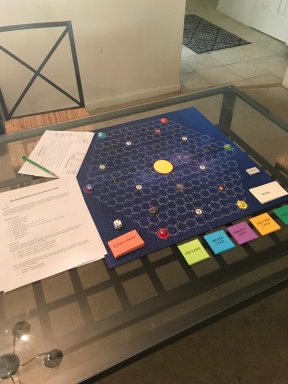 Now that my friends have helped me with their thoughts/critiques, I am excited to say that the next phase is where all of you come in!

Now that my friends have given me their thoughts, I am hoping to branch out and get some critiques from neutral parties. Since I know you’re all board game enthusiasts, I’m hoping that you will help me out by giving the game a try and letting me know what you think!

So, what is this game about you ask? And how do you get a copy to try? Both great questions! Currently I am in the process of making some tweaks to the game and getting some better-quality pieces. Once that is complete, I will be sending out a new blog post with a description of the game and some basic mechanics. I will also be creating a new tab on this blog with an online application to receive a copy of the game for playtesting. If the game sounds interesting to you and want to give it a shot, complete the application and I will send you one of the prototype boards to try out. All I ask is that you give me some feedback about your gaming experience, and if you liked it then spread the news!

Alright, that’s all for now- be on the lookout for the next post, I’m excited to see what you all think about my game!!

Hey everyone, long time no post! I’ve been putting this blog on hold for a very long time (almost a year to be exact) for a number of reasons. Work has been crazy, I’m getting ready for a wedding, and while my love of board games hasn’t diminished I find myself with less time to dedicate to finding and playing new games. All of that being said, I’ve decided to pick this blog back up for one major reason: I am currently in the process of designing my own game!

I’ve had this idea for a game for at least a year now, but I have finally started dedicating time to it and it’s turning into something really cool. I have recently ordered prototypes to use for play testing, and I am hosting a game night next weekend. If all goes well, I should be sending out the game to other bloggers for reviews, and getting a Kickstarter campaign up and running!

I will be setting up a separate page on this site to dedicate to the new game- it will have a basic rundown of the gameplay, some pictures, and an option to sign up to be a play tester yourself. If you have any interest in playing the game and letting me know your thoughts, or if you have any game design experience and are interested in working with me (I have minimal Photoshop experience and need a good designer/manufacturer), send me a message and I’ll follow up as soon as possible!