This board game of the week is thanks to my girlfriend, Mary, and a group of our friends. I had heard a lot about “that Werewolf game” from them for a few weeks until I finally got a chance to try it out myself.  The result was a group of 7 people in their mid-20’s arguing about how I was obviously a werewolf, even though I continuously told them that I wasn’t. Lack of trust aside, the game is based around the childhood game “Mafia” and is a fun and engaging way to spend your time. The game is very fast-paced, so the expectation would be to play the game at least 2-3 times in a row in a single sitting.

One Night Ultimate Werewolf starts with everyone choosing what “roles” they want to include in the upcoming game. The game comes with 16 different roles that all have different effects during the game. Every game must have at least 2 werewolves, 1 seer, 1 robber, 1 troublemaker, and one villager. Depending on the number of players in the game, additional roles are added before the game starts (must have three more roles than the number of players in any game). Once the role cards are chosen, they are shuffled and one card is given to each player and the remaining three are left face down with nobody viewing them. After you check your role, the “night” phase of the game begins. This is where the Mafia style of game mechanic comes into play- during this phase, everybody closes his/her eyes, and players with certain roles “wake up” (open their eyes) at specific times to complete tasks related to their roles. These actions change depending on which roles were picked, but the order for when everyone opens and closes his/her eyes remains the same no matter what. Once all of the roles have completed the necessary tasks, the night phase ends and it switches to the “day” phase.

Once it becomes the day phase, everyone openly discusses who they believe is the werewolf. The werewolves then try and divert the blame from themselves by accusing others, while the villagers are all trying to determine who the werewolves are. You can say anything you want during this time, but you cannot show your role to another player- they will have to take you at your word. The day phase usually only lasts about 5-10 minutes and once time is up, everyone votes for who they believe the two werewolves are (this is done by pointing, either at a person or at the face-down cards in the center if you think nobody is a werewolf). The two people with the most votes are then accused of being the werewolf and must show their card. If one of them was the Werewolf, then the villagers win. If neither of them was the werewolf, the werewolves win. 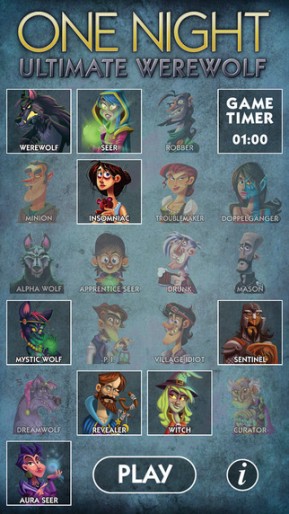 There is, in fact, an app for that

This description of the game is very basic and glosses over details of how the different roles affect each other. There are certain roles that switch role cards between players, look at other player’s roles, or even take on the role of another card that you view. After the night phase, you could find yourself in a situation where you have no idea what role you currently have in comparison to when the game began. This makes your strategy and the voting process all the more complicated, and certainly adds to the intrigue of the final results. Another big factor in the game is the speed- it is supposed to be a very quick game which only allows for a specific amount of time to discuss and vote. In order to help with the timing portion of the game, I highly recommend someone from your group download the free app that goes with the game. This app not only keeps time for you throughout the whole game, but also announces the phases of opening and closing eyes during the night shift according to the roles your group is using.

One Night Ultimate Werewolf is a difficult game for me to review- on the one hand, its gameplay and fast-paced style are quite engaging. On the other hand, there are some flaws in the way the character roles are structured, and the time limit feels constricting at times. I like the fact that you can choose what roles are involved in every game, but I am not a huge fan of the idea that your role can change without you knowing it. The fun of the game is certainly apparent- bluffing and trying to trick your friends into thinking you are one thing when you’re actually another is a staple of many board/card games. Still, the concerns should definitely be noted; knowing what the game is about is important, and will make it more fun because you’re going in with a full understanding of what to expect.

I feel like you have to be in a very particular mood if you want to play this game- it is certainly a lot of fun when you get a group of people involved, and the positives certainly outweigh the negatives, but I would recommend understanding the rules and formulating a strategy before you dive headfirst into the game.

Most of the time when I set out to play a board game, the setting is very specific: I usually want to play in the comfort of my own home or potentially a friend’s home. Not often do I veer from that preference, but sometimes I do feel like venturing out into the world and playing games in different locations. But what locations are fit for board games? For a while it felt like if it wasn’t in a house, it wasn’t going to happen, but recently I’ve been finding different locations cropping up out in the real world where board games aren’t just accepted, but encouraged. Here is a list of the 5 types of locations that are becoming “board game friendly”.

Back in college I remember discovering that one of my favorite pastimes was hanging out with my friends, having a few drinks, and playing board games. At 25 this preference hasn’t changed much- I find myself spending plenty of days with friends playing games with a few beers or glasses of wine. I’ve always considered this type of activity more relaxed than the active, lively crowds that I join when I go out to a bar.

Surprisingly enough, there are places across the country combining these two seemingly different activities. Suddenly there are bars out there that you can play board games in. Some of them you can bring your own, others rent them out to you for use while you drink and chat with friends. I know of a few in the Washington D.C. area near me (my favorite is a place called Board Room), but from a simple Google search you can find locations in New York, Chicago, and Los Angeles that have the same theme.

Breweries fall into the same category- while they are usually more laid back than your average bar, the main purpose for going to a brewery is to have a few drinks and enjoy yourself with friends. Adding board games into the mix is slowly becoming more popular, with multiple breweries popping up with board game themes and outdoor areas being set up to play games that you bring with you. Breweries are taking advantage of the trend by inserting themselves into the gaming lifestyle- check out an interesting article about the phenomena by the Huffington Post.

While comic books, anime, and TV shows still control the lion’s share of the conventions out there, board games have been able to find a slice of the pie in many of the more popular “cons” scattered across the US. Gaming tournaments, booths, and prizes are staples of almost all conventions that you would go to, and conventions tailored specifically to board games are also becoming more prevalent. A list of board game cons can be found on Board Game Geek, highlighting some of the best places to check out new/developing games in the market.

Shops dedicated to selling board games have been around for a while. In fact, it might be that they are less common now than they were before the internet took some of the board game sales from the “mom and pop”-type shops. Still, most areas have at least one local gaming store, which can include anything from card games to miniatures to traditional board games as well. These game stores have to find ways to attract old and new customers, and board game nights/board game tournaments are a big pull for weeknights and weekends. 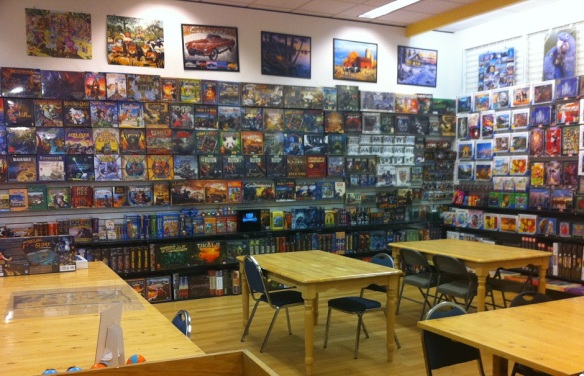 This new trend is the most fascinating to me- the Atlantic posted an article back in 2014 about How Board Games Conquered Cafes, and I tend to agree with them based on what I’ve seen. The focus of the article is a lot on families enjoying board games in coffee shops and cafes as a cheap way to get out of the house, enjoy some time with the kids, and play some games that everyone enjoys. That’s not the only option though, as the cafes are also great places for after-school activities of teens or a way to unwind for adults who spend their day sitting at a desk typing on a computer.

Based on what I’ve seen from personal experience, I can certainly verify that board games are making their way out into the world more often as time goes by. I always stress the social aspect of gaming, so seeing more and more location for playing board games crop up is very encouraging. That being said… I don’t expect game night at home to be going away any time soon.

Back in December of 2015 I wrote an article about the board game King of Tokyo and described a dice-rolling game with a fun and adventurous theme. Board game publisher Iello took the success of their original game and ran with it, creating the alternate version King of New York. King of New York takes the same gameplay mechanics as King of Tokyo and adds to them/enhances them, creating a game that is similar to the original but with a different feel to it. Since the gameplay is so similar, I am not going to go into a description of how the game works in this article (for details on that, check out my King of Tokyo article above). Instead, I am going to go through a list of the changes/adds Iello made to this game compared to the original:

someone is new to board gaming and better for more casual game nights. King of New York’s additions make the game more complex, which makes the game better for high-strategy groups and a more intense gaming experience. King of New York should not replace King of Tokyo in your collection, and in fact they both complement each other quite well. Because of this, I feel that King of New York deserves the same rating as King of Tokyo did: a fun, challenging, and engaging game with beautiful artwork that is great for your collection.

Follow The Boardwalk Games on WordPress.com
Join 41 other subscribers