With the holidays coming and going, I finally had some time to take a look at the second box I received from Tabletop Monthly. This is actually perfect timing, because it looks like Tabletop Monthly has officially begun their services as of January 1st! A quick recap for those of you who forgot, Tabletop Monthly is an up and coming company that sells subscriptions for monthly mystery boxes of games and accessories. They have two different types of subscriptions, one for more hardcore strategy games and one for lighter, family games. I’ve already reviewed my copy of the hardcore subscription, so this time I’ve taken a look at the Family subscription. Let’s get to it!

Board Game, Eat Me If You Can– A smaller game with cards and tokens, this Iello game focuses on rotating rounds where players play as either the wolf, Little Red Riding Hood, the three little pigs, or the sevin young kids. When you’re the wolf you try to surprise the other players and avoid traps set by everyone else. A cute adaptation/combination of multiple children’s stories including an evil wolf, the game looks slightly more complicated than I initially anticipated, but it seems like it’s easy enough to pick up. I had heard of this game before and was interested in playing, so it’s a great addition to my collection. 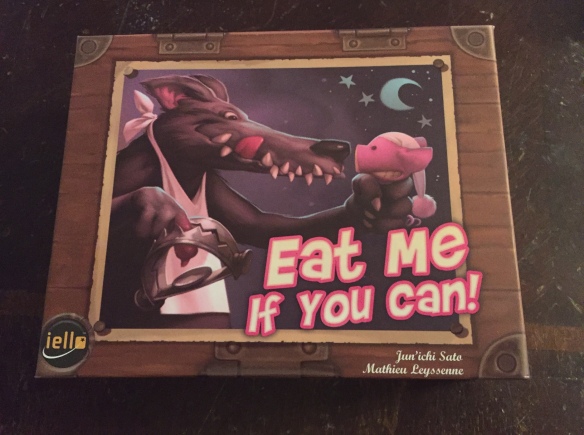 Card Game, Timeline: Historical Events– A card game based on historical events, timeline focuses on playing historical cards in order from your hand until you use up all of your cards. If you play a card in the wrong order, you have to draw another one from the pile. Getting the correct timeline becomes more difficult as cards are played out. I’m not much of a history buff, but I’ll admit I’m intrigued with this game. I feel like depending on the cards in your hand it could be really easy or really difficult. For example, one of the cards is “Fall of the Berlin Wall” and another card is “The invention of Chinese Calligraphy”. I plan on trying this game out with some of my history buff friends soon. 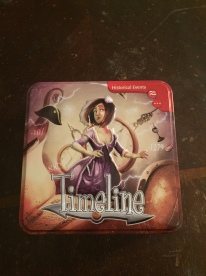 Mini Game, Bus: Transit Demands It– Now this game is the most intriguing to me- the size of the game is smaller than a stack of gum,

when spread out.  Created by a company called Perplext, Bus focused on players navigating b
us routes based on randomly laid out roads. After the road is created, each player then chooses what they think is the most efficient route to pick up passengers without driving too far to earn points. The fact that I can fit the game in my pocket is certainly appealing. I plan on taking this game on road trips in the future.

Overall I have enjoyed both boxes that I received from Tabletop Monthly. I like the games from the Family box more, but the expansions and accessories from the Hardcore box are cool value-adds to the box. I think that you can enjoy subscribing to both depending on your preferences with games. Ultimately it’s a fun way to increase your game collection without breaking the bank, as well as potentially being a good gift idea for board game enthusiast friends.

As mentioned in a previous post, I recently received two subscriptions from the company Tabletop Monthly with some cool board game goodies and nerdy accessories. I’ve been looking forward to diving into them for some time, and this week I’ve finally had some time to check them out in more detail. I focused on the “Hardcore” box set, with the more competitive and complex games as opposed to the “Family” subscription. Here are the items I received in this month’s box:

Board Game, Car Wars- A Steve Jackson Games creation based on gladiator style automobile combat, Car Wars is highly focused on dice rolling and maneuvering vehicles around a track. The game is highly customizable and complex, with a comprehensive rulebook and a number of different types of vehicles and weapons. Games can be played either in a single duel format or a multi-session campaign style, depending on preference. Average price is around $16, so it is a majority of the value in this box set.

Expansion Pack, Star Wars E-Wing– One of the more popular competitive games on the market, the Star Wars Miniatures game is a war game with a number of expansions available. I currently don’t own the core game for this expansion, but it is on my wish list so this is a good opportunity to start my collection of miniatures. The E-Wing miniature is worth about $10 and is helpful add-on to what looks like a cool game.

Heroes of the Storm mystery mini- This was the one extra in the box I didn’t have any information on, but it looks like Heroes of the Storm is a miniatures set created by Blizzard Gear which has a number of different cute minis for collection. I got the Clear Variant mini character Nova, from the StarCraft set. A cute little addition as part of another “collect them all” series, I personally won’t have a strong urge to collect more but still think it’s pretty cool. Each miniature is part of a random draw, and cost about $10 per mini.

So now that I’ve given a rundown of the items in the box, here are some of my thoughts on the box and its contents:

Overall I was quite happy with the mystery box I received for “Hardcore” games- I will be reviewing the “Family” subscription later this week, and am hoping to have the same results!

One of the most frustrating parts about board games for me is purchasing the games. I don’t mind spending money on a good game of course, but I have a very long list of board games that I want to play at some point and games can be expensive. It’s hard to justify buying more than a few games a month, especially around Christmas time when you’re buying gifts for your friends and loved ones. One of these days I hope to find a way to rent board games for a limited time (if someone ends up creating this, I want in!), but until then it’s either playing your friend’s games or buying them yourself. With all that being said, I was recently contacted by an up-and-coming family business that could potential make buying games a lot more interesting.

The company is called Tabletop Monthly, and it works just like it sounds. You subscribe to their service for $30 a month and once a month you receive board games, card games, and accessories for your enjoyment. Whatever games you receive are your forever, and you never know what games you will be receiving on any given month. There are two different types of boxes, one for “hardcore” games and one including “family” games. The hardcore games are more technical and competitive, whereas the family games lean towards simpler themes that you can pick up easily and play with anyone. This isn’t the first board game subscription service in the market, but it’s a good price and the different types of subscriptions allow any type of tabletop gamer to enjoy the games they deliver.

The company is owned by a family of gaming enthusiasts (who own a pizzeria as their main job) and they were kind enough to give me two sample boxes to try out and review. Initial impressions are good- I received one game and two miniatures in the hardcore box and three travel sized games in the family pack. One of the most important things to mention about the games I received is that I didn’t own any of them; in fact, I had heard of some but there were others I didn’t know existed until I opened the box!

I haven’t gotten a chance to play any of the games yet, but I plan on doing so soon and writing up an in-depth review of everything I received. Until then, if you’re interested in learning more about Tabletop Monthly you can find them at tabletop.cratejoy.com or on Twitter @tabletopmonthly. They’re currently doing a promotion where if you provide them with your E-mail address, you’re entered into a drawing to receive a lifetime subscription for free!

That’s it on Tabletop Monthly for now. Be on the lookout for more posts soon with additional details about the new games I got!