I love Star Wars, and I love puns, so when I saw this game on the shelves at a local store in Pennsylvania I knew I had to play it. My girlfriend got it for my birthday, but I haven’t been able to try it out until last weekend. I expected the game to mostly be about Star Wars-based puns, but the game-play is actually very unique and fun. Fully customize-able based on the numbers of players and the level of difficulty desired, the experience is different every time you play. 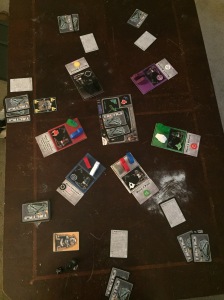 Space Sheep is a collaborative game where everyone works together to either win as a group; if you run out of cards before completing your goal, everyone loses. The object of the game is for you to move all of the sheep and shepherd tokens to the appropriately colored solar system. This is done by playing Tactics Cards, which are played to move either the sheep or shepherd (or both) to a different location based on the solar system they were in previously. In addition, there is a timer that is continuously going throughout the game, and if it runs out then the Wolf gets to attack and you lose tactics cards. The game ends either by the group winning and getting all sheep and shepherds to their correct systems, or the group runs out of tactics cards to use and loses. The game relies heavily on communication from player to player, as well as understanding that sometimes you have to move pieces to the wrong system in order to eventually get all of them to the right system. 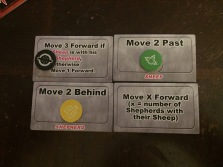 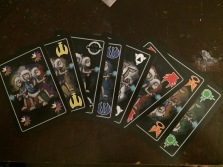 The collaborative effort portion of the game is part of why it is so much fun. Talking through your turns and figuring out how to use the cards in your hand based on what other people can do is a lot of fun. In addition, the timer makes things interesting and keeps the game at a fast-paced level. The ability to customize the game is helpful because you can play with any number of players and adjust the difficulty based on who is playing. The game also would work well for children, because it’s cute and fun and also helps promote teamwork. Finally, for someone who enjoys Star Wars and cheesy puns, reading through the instructions for the first time is almost as enjoyable as the game itself.

The downsides aren’t too drastic, but they are worth noting at least; first, the game takes a long time to figure out. Because there is a timer, it can be frustrating at the beginning stages when you don’t have time to decide on your best option for a turn. That, plus the numerous puns in the instructions which grow less entertaining after the first or second read through, can make the first part of learning the game tiresome. However, once you play through a few rounds the strategies and game-play become more apparent, and so the game becomes much smoother. The fact that the game is customize-able is one of its strengths, but also one of its weaknesses. If you don’t know much about the game, it’s tough to decide on how difficult you should make it right away. I recommend making it easier to start and then working towards the harder difficulties.

As a whole, I got Space Sheep expecting it to be all about the parody, but soon found that the theme was only a secondary part of a clever and fun game mechanic. I don’t expect this game to be one I play every week, but I do think that it’s a great game to play with friends and would be fun to pull out at parties and group gatherings. I also plan on trying to play the game by myself soon (a solitaire option is possible) to see if that’s as fun as playing with a large group. No matter what though, I’m glad to add the game to my collection, because nothing beats getting a chance to “Ewe’s the Force…”