At the risk of sounding like an old man, I’ve always preferred the good old days with games where it was a one-time purchase for the product and that was it. There might have been a few alternative versions to games, but they were separate from the main game and had their own style/content to offer. More recently, it feels like alternates and expansions are being made en masse as a way of capitalizing on a game’s popularity. Most of these expansions or alternates provide some additional perk or benefit, but if you really look closely it can sometimes feel like you’re paying just as much if not more to expand on a game when you’d rather it simply come with the original. This is especially true with video games; my N64 games had hours upon hours of content with no additional purchases associated with them. However, now when I’m playing on my PS4 it feels like every game is somewhat incomplete due to all of the DLC that you have to pay money for. Now, if an expansion is more than just a new outfit or weapon and actually significantly enhances the story then I will be much more likely to give it a shot, but I will always be slightly skeptical until proven otherwise.

Board game expansions usually have a different feel to them. Sure, they aren’t necessarily needed to play the game, but they always add a new layer, a new strategy, and sometimes even allows for more players. Alternate versions of games can also have a lot of cool new differences to their originals, adding different gameplay and new themes. These kinds of games are the reason why I try to keep an open mind when an expansion to a board game I love comes out, or there’s a new game based on one I’ve played before. So as a tribute to the games that keep on giving, here is my list of 5 great board game expansions/alternates:

t it’s impossible to choose just one. Other than the most basic expansion which bumps up the number of players from 4 to 6, you also have the Seafarer’s Expansion, then Cities and Knights, Traders and Barbarians, etc. Then on top of that there are alternate games that are separate from the original. As one of the premier board games of our generation, it’s no surprise that Settlers has found ways to grow on its success through expansions. If you haven’t tried any of the cool additions to the game, I definitely recommend them, especially the Seafarer’s expansion.

2) 7 Wonders: Leaders- An add-on that is actually less known than t 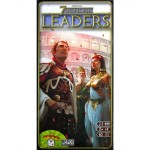 he 7 Wonders: Cities expansion, Leaders adds additional regular cards and also brings in 42 historical leader cards, which you play at the beginning of each age. It also adds another Wonder so that 8 people can play rather than 7. Overall if you like 7 Wonders, the Leaders expansion does a great job of adding additional layers to it and also giving an extra person a chance to play.

3) Munchkin Card Expansions- One of the best parts about the game Munchkin is all of the hilarious cards that can be played. From monsters to power-ups to

curses, each card has its own personality and is a great way to make you laugh. While the expansion packs don’t create any major changes to the
game, the added cards are a great way to keep the game fresh and add to the laughs. Expansion 3: Clerical Errors is my personal favorite of these expansions. The game also has a number of sequels (Zombies, Apocalypse, etc.) for anyone who wants to try out a different theme other than the original D&D spoof.

4) King of New York-When Iello created King of Tokyo, they made a game that is immersive and clever and yet somehow straightforward to play. The concerns I h

ad with King of New York went two separate ways: either they would make the game exactly like the original, or they would completely abandon the style and make a completely unimpressive game instead. Luckily enough neither of those things happened, and the game King of New York found a way to take the same principles of King of Tokyo and expand/revise them to make something different, but with the same feel as the original. Having both games in your board game collection is definitely worthwhile.

, so when I tried out Europe I was surprised at the subtle yet powerful differences between the two. It took some time to get used to the different geography, but the addition of ferries and tunnels plus the additional railroad markers made the game subtly more challenging. While this version might not be able to replace the original for me, it was a lot of fun and I plan on adding it to my collection soon.