Time for a blast from the past- my board game of the week this week is from the 80’s and is one of my favorites from my childhood. The game is a strategy game called Labyrinth, though when I was a kid they called it The a MAZE ing Labyrinth (puns are fun!). For those of you who don’t have David Bowie singing in your head right now, you need to watch this move ASAP: 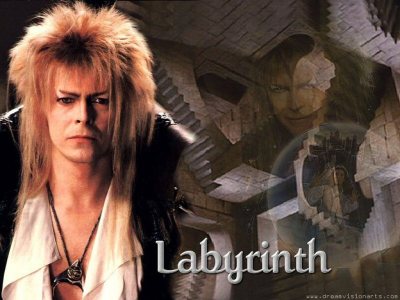 Now the game doesn’t have any official affiliation with the movie Labyrinth, but it does have the same quirky feel to it. The game includes a board with tiles glued to it along with multiple “free” ti

les that are placed in empty slots along the board. There is also a set of cards with pictures on them and four game pieces. To start the game, everyone chooses a piece and puts it on the designated starting square of that color, around the 4 corners of the board. The free tiles are placed randomly around the board, with all but one being added to the empty slots available (we’ll get to the leftover tile soon). Finally, all of the cards are dealt out evenly to the players and placed face down. Nobody looks at the cards, and you will only look at one card at a time.

To start the game, everybody draws a card without showing the other players and looks at the picture. That picture corresponds with one of the tiles of the labyrinth. The object of the game is to navigate through the labyrinth and land on the tile with the picture of your card, and then move on to the next card, etc. until you have landed on every card in your deck. Seems simple enough, right? Well the tricky part of the game l

ies in the extra tile I mentioned earlier. The board is designed so that every other row is moveable by taking the free tile and pushing it onto the board, pushing off another tile in the process. Every time you take a turn you have to add the free tile to the board before your turn can end (you can do this at any point in your turn). This makes the game much more complex, because not only do you have to plan your route based on where you add the tile but you also have to take into account your opponent’s moves, all the while not knowing what picture they are trying to reach.

The best part about this game is the strategy involved- everyone has his or her own ideas for how to get to the correct picture, and everyone has to plan far in advance sometimes to get to the destination while also being flexible when someone moves the labyrinth in a direction you weren’t expecting. There are also a number of alternative strategies to the game, such as intentio

nally pushing the tile you are trying to reach off the board or even pushing other players off the board (this takes the player back to where he or she started the game). It’s a fast-paced, easy to learn game that is great for a small group of friends or family game night.

The biggest drawback of the game is one that plagues many board games, and that is the luck of the draw. Ultimately where your tiles end up in the beginning of the game and what cards you were dealt are a huge factor in your success. This is not an uncommon thing in games, but there is something particularly frustrating about someone drawing three pictures, all of which they can get to within a turn, while you’ve been stuck on the opposite side of the board all game. Still, the ability to manipulate the board to your favor ends up being more important than where you are in relation to your tiles, so in most cases the games tend to be fairly even.

Overall the game takes the strategy of a game like chess or backgammon, the movement of a game like Monopoly or Sorry, and the added twist of a constantly changing board, and throws it into a fun and interesting theme. I would recommend the game to anyone, especially kids since it was one of my favorite games growing up.