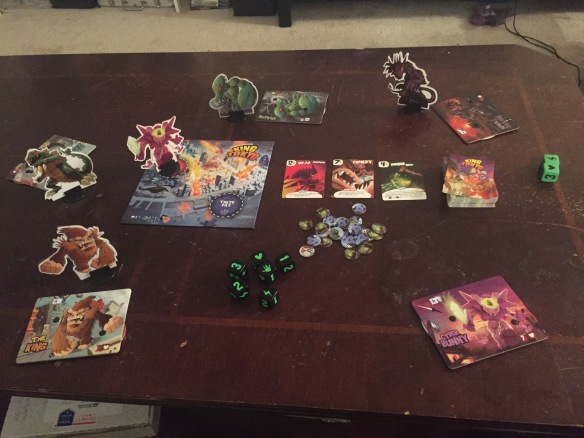 I once read an article that discussed the idea that a number of successful games are usually centered on themes that aren’t particularly interesting in real life. There is some truth to that: games like Settlers of Catan, Monopoly, etc. all have fairly straightforward concepts based around tasks or stories that are mundane and unimpressive outside of the board game realm. King of Tokyo takes this idea, smashes it into the ground, and sets it on fire while laughing gleefully.
The theme of King of Tokyo is this: you are a giant monster trying your best to infiltrate and destroy Tokyo all while undermining the other monsters trying to do the same thing, ultimately powering your way to the top and earning the title of the King of Tokyo.  Sounds simple enough right? In reality, the game is a predominately dice-rolling game with in 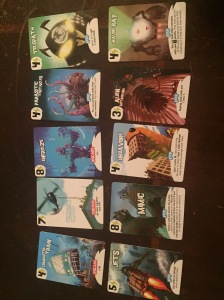 tense amounts of strategy and some power-up cards sprinkled in for extra fun. The game starts off with everyone at 0 victory points and 10 health. The object of the game is to gain 20 victory points all while keeping your health from dropping to 0. You can victory points by rolling the dice, paying for victory point cards, and surviving inside Tokyo where you’re more likely to be attacked.

The dice rolling mechanic is very similar to Yahtzee- you have 6 custom dice which you roll all at one time, then ge

t two additional dice rolls where you can choose to pick up and roll any of the dice you had thrown previously. After you’re done with your three rolls, you immediately “resolve the dice” by taking any necessary actions that come about from the dice you’v
e rolled. Each die has 6 numbers/markings on it, and the goal of your dice rolls is to either match up the same number together to earn victory points, stockpile health/energy, or attack your opponents. After the dice have been resolved, you can buy any of the face-up cards to power up your monster and then use any effects from cards you want, and then your turn ends.

Ultimately this game is a lot of fun- there is a lot of strategy revolving around spending your time in or outside of Tokyo. Staying in Tokyo gets you victory points, but also means y 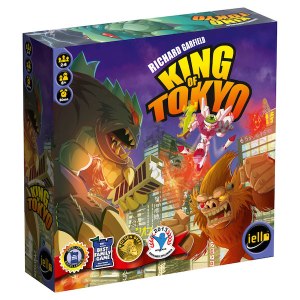 ou are a target for opponents to attack you. You can only stay in Tokyo when you have 5 health, so stockpiling health and energy is important. The cards bring an additional layer to it, and while the game can take some time getting the hang of it’s a lot less complicated than it originally looks. I particularly like the strategy of the dice roll, where you have to decide what to focus on during a particular turn. Choosing between victory points, health, energy, and hurting your opponents can be the difference between progress and defeat. Artistically the game is also very appealing, with six individual monsters that all look really cool (they somehow find a way to make mecha-bunny particularly impressive) and the cards each have a unique cartoon picture that makes the game engaging to the eye. I would have liked to see each monster have their own special ability to make your choice of character more important to the overall strategy, but even without that there are plenty of different paths you can take to claim the title of King. 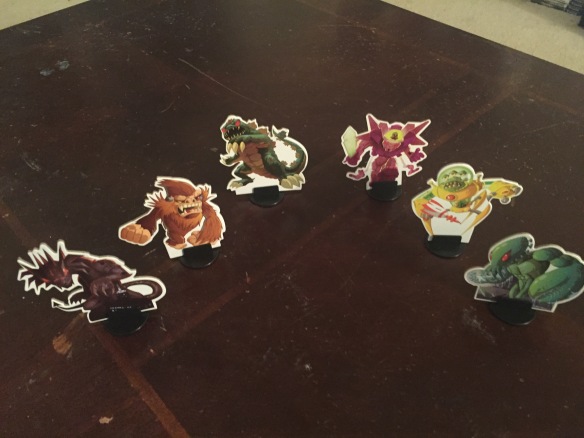 This game is suited for people of all ages and groups of all sizes- Iello really knocked it out of the park on this one. Plus, giant fictional monsters fighting each other in a large populated city should always be enjoyed no matter what the context.