This past Monday I was reminded of how truly lucky I am. I celebrated my 25th Birthday and was overwhelmed with love and support from my friends and family. Well wishes, cards, phone calls, everyone who reached out in some way made me feel thankful. One of the ways people made me feel particularly appreciated was by giving me board games. I received 6 board games this year, all valuable additions to my collection that I look forward to playing. Here is a list of the games I received, along with some additional detail on each game and the people who gave them to me:

Doctor Who Yahtzee- My folks are very supportiv

e of my passion for board games. The vast majority of my board game collection has come from my family, and since I played so many games with them when I was younger they have a good eye for what I like. They definitely knew what they were doing this time too, as they combined two of my favorite things in this gift. Yahtzee is a game that is pretty unpopular in some gaming circles, but it holds a special place in my heart because I remember playing it with my Gran whenever I visited my Dad’s family. Board games were always popular in the Dixon household, and Yahtzee was one of Gran’s favorites. In addition, Doctor Who is one of my favorite TV shows, so it has added value in comparison to the regular Yahtzee game.

From my friend Annie:

Doctor Who Monopoly- Once again combining my love of board games with British TV
shows, my friend and neighbor Annie was kind enough to get me a gift for my Birthday. I haven’t known her that long but she’s a really sweet person and I appreciate the gift immensely. I’ve written about Monopoly numerous times so it’s well documented how much I enjoy collecting these boards, so this fits perfectly into my interests with board games.

From my Girlfriend Mary:

I’ve mentioned my girlfriend, Mary, before on this blog, but just to give you some perspective: Mary is into superheroes, board games, video games, is a movie buff, and overall is probably as big a nerd as I am. Basically she’s awesome, and so the fact that she got me 4 board games is just another sign that I’m with someone who really gets me. Here’s the full list of games:

Zombiecide –The first game on the list is Zombiecide, which we’ve both heard great things about, but have never played personally. It is supposedly a pretty intense cooperative game with ten different levels with varying difficulty for each. I’m seriously looking forward to trying this game out- be on the lookout for a post on it sometime in the next few weeks!

The Resistance – I admittedly haven’t heard or seen

much about this game before, but from what I can tell The Resistance is a tabletop party game based around a dystopian universe where a group is trying to overcome a corrupt government. I love dystopian novels and themes, so that immediately stands out to me. Apparently the game relies on deception and misleading the other players, so it could be a Sheriff of Nottingham-esque game style. I’ll be sure to see what it’s like soon enough!

One Night Ultimate Werewolf- Known to my girlfriend as “The

Werewolf Game”, I’ve been hearing good things about this for a while so it wasn’t surprising when I unwrapped it. A fast-paced game (only allowing for ten minutes of play), the game apparently has an app that links to it and the board game is an expansion of that. Everyone playing gets a specific role and then… something happens. I honestly don’t know yet, but I know it’s a lot of fun and I have a group of friends lining up to play!

Space Sheep- By far the best gift I got for my birthday this year, I saw this game at the 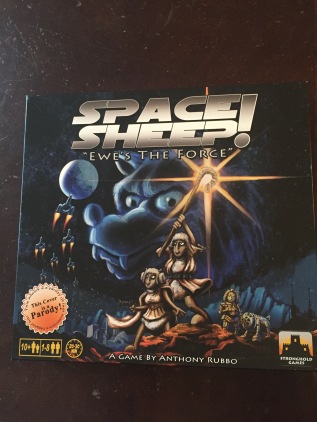 board game store Games Unlimited in Pittsburgh and was immediately drawn to it. Unfortunately I had already decided on the game I wanted to buy, so in order to avoid spending too much money I didn’t get it. Luckily enough Mary was there, and she was kind enough to buy the game for me. Now, for those of you with a keen eye, you will notice that this game is a parody of Star Wars… that involves Sheep. Here is a basic description of the game: “You are a Sheep. You are a Defender in the Strategic Sheep Command. You have trained all of your career for this moment in history. You know how to defeat Wolf – Ewe’s The Force…” Another cooperative game with some obvious wit and humor, I can already tell that I’m going to have a ton of fun trying this one out.

Once again, thanks so much to everyone who reached out for my Birthday. I can’t wait to try some of these games out, and rest assured I will be keeping my blog updated with my experiences along the way!