Before I start my first post of 2016, a quick note to all of my followers and readers out there- thanks so much for all of your support as I’ve started my blogging adventures in 2015. I’ve enjoyed every minute of it, and I hope you all have too. 2016 has a lot of great stuff in store and I will continue to write and learn, so I hope even better things await in the upcoming months. For everyone reading this, I hope you have an amazing year and the future is bright for you. Now let’s get to it!

I was lucky enough to receive a number of board games over the holidays, so I have a lot of great material to write about over the next few weeks. One of the gems of my new board game collection is the Bezier Games castle-building game Castles of Mad King Ludwig. For those of you who enjoy random historical tidbits, King Ludwig was actually a real king of Bavaria in the 1800’s who was known for spending ridiculous amounts of money on extravagant castles and construction projects. His penchant for spending money ultimately was used as justification for declaring him insane by his cabinet in an effort to depose him. In Castles of Mad King Ludwig, you channel your inner architect and try to appease the Mad King by building the most impressive castle possible.

Looks pretty mad to me…

The object of the game is to score as many points as possible based on the rooms you play, along with special bonus points from completing certain tasks and gaining the King’s favor. The game setup is that every round, cards from the Room Deck are drawn to determine what size rooms will be played for the round. These room tiles, with varying points and effects for each, are placed in a “bidding” area with different cash values associated with them. One player in the round is the “Master Builder”, who chooses where each room goes in the bidding area which determines how much it will cost for that round. Next, the player to the Master Builder’s left buys 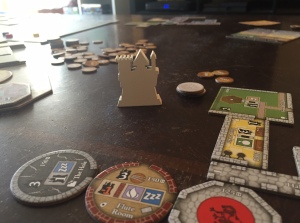 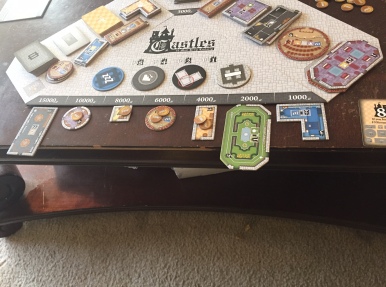 I must admit that when I first opened the box to this game, I was fairly overwhelmed at the sheer amount of pieces involved. In addition to all of the different rooms that are available, there are two sets of cards, 24 favor tiles, a Master Builder token, player aids and markers, 4 separate pieces to form the board, and 4 foyers whi 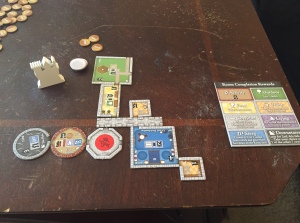 ch act as the starting point to your rooms. The first time you play the game, expect to take a very long time organizing and setting everything up (once you’ve played the game a few times it gets a lot faster). Because of how many pieces are involved, make sure that you have a lot of space available to play, especially if you have four players.

The rules of the game are fairly straightforward, though it does take a few rounds to understand the strategy of playing certain rooms in certain areas. Ultimately you can play any room pretty much anywhere you want as long as there is an entrance from another room and no rooms overlap, but you get added bonuses for having certain types of rooms adjacent to other types (bedrooms next to a hallway, living rooms next to food rooms, etc.). I once had a castle which had a Sauna attached to the Master Bedroom, while my girlfriend’s castle didn’t have a single place to sleep by the end of the game. Ultimately the structure of the castle doesn’t really have to make sense, though the more you follow a straightforward placement of rooms the easier it is to add on to your castle in the later rounds.

I thoroughly enjoyed playing this game- the style feels like a mesh of games like Ticket to Ride, Settlers of Catan, and 7 Wonders, while also adding in new elements to it. I’ve played the game three times with two players and once with three, and there were major differences between those two game types and the strategy you need to use to win. I would like to try it with four players soon, as I’ve heard that it is the recommended way to play. Every game you play will end up differently, since there are more room tiles than room cards so you will have a different set of rooms available to you at different times each game. The types of rooms available are fun to look at, and seeing what you’ve built when the game is over is a lot of fun (my sister and her fiancé actually recommended we use it as a D&D Dungeon randomizer). The complexity of the setup and initial mastery of the rules does take some time, but once you get the hang of it games go by quickly and are great to play. I would recommend the game to more advanced board game enthusiasts as opposed to the casual player, but all types of people will enjoy the thrill of the game’s mechanics and theme.