For those of you who don’t know much about me, I am a big NFL fan. On any given Sunday during football season odds are astronomically high that I’m spending the day sitting on the couch watching NFL Redzone all day and checking my fantasy football scores. So when I say that my favorite type of Monopoly board is based on the NFL, that fact should not be surprising to you. What might be surprising is the fact that the game I am playing is from 1998. This is actually the very first non-traditional Monopoly board that I played, and it was the beginning of a growing collection of different types of Monopoly boards.

The similarities of NFL Collector’s Edition Monopoly are fairly obvious- the number of properties, players, and board are all the same setup as a regular Monopoly board. You still have Jail and Free Parking and you still pass go and collect $200. The important rules and regulations of the game all mirror the Monopoly everyone has grown up playing. So what’s the difference? It’s all in the aesthetics. The properties, rather than being locations, are NFL teams. All 31 NFL teams are represented either as their own property, or in groups of teams listed as the “railroads”. Rather than houses and hotels, you buy sections and stadiums. Instead of Chance and Community Chest, the card selections are from AFC and NFC to represent the NFL’s two divisions. Even the dice and tokens are different, with custom football-shaped dice and NFL themed silver tokens. The gameplay is almost identical to your average game, yet the feel is totally different because of the different look. 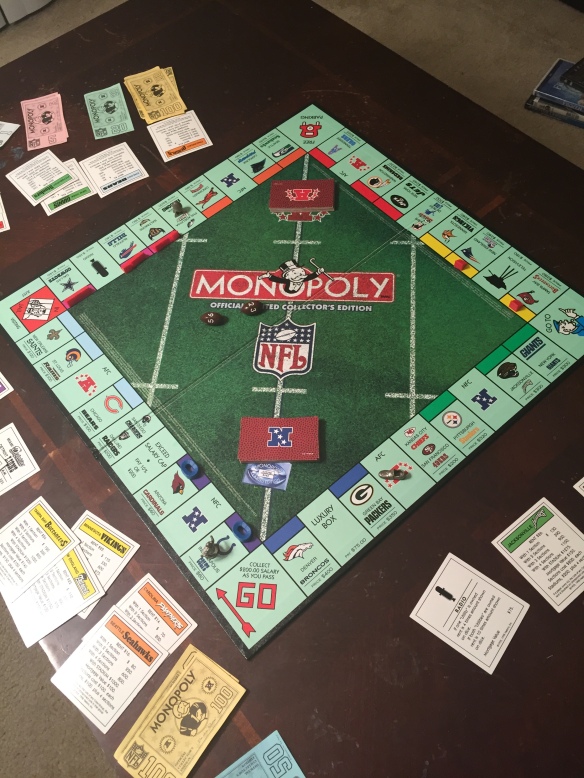 I think my favorite part of this game is about the nostalgia. For any football fans over the age of 25, you will love seeing where all of the NFL teams are on the board. A few prime examples: The Jaguars are the 5th most expensive team on the board, and the Cardinals and Colts are the two least expensive. It’s just wild to look back at how different the NFL was only 17 years ago- there weren’t even 32 teams at the time! But nostalgia isn’t the only fun aspect of the game- Parker Brothers took this theme and made the most of it, and it makes it a lot of fun. The NFC and AFC cards are all football-related events, with pictures of the Monopoly Man in football gear being traded or fighting off injury. On top of all that, the game runs like standard Monopoly, so the different theme doesn’t affect gameplay.

Downsides are the normal downsides that come with Monopoly- longer game times, slower pace of play, and a possibility of players to run away with the game if luck is on their side. Ultimately my enjoyment of Monopoly is higher than most, so I understand that I do have a bit of a bias here. Still, the NFL edition of this game is just as good as the standard version of Monopoly, so feel free to take that however you would like. It’s a great game to add to the collection for any sports fan looking for a reminder of the good ‘ol days. 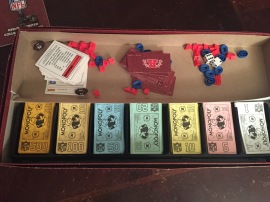